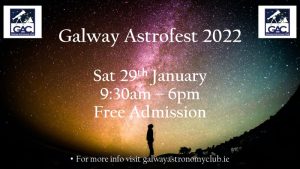 Welcome to the Galway Astronomy Festival 2022 – This year our festival will be going virtual again. We hope to keep it as close to the format of our usual festivals as we can. We hope you enjoy the day.

This years festival will be presented via Zoom webinar. Registration is required.

Register in advance for this webinar using this link: 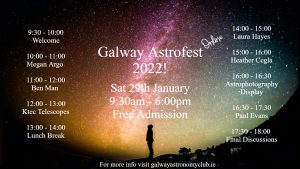 Bio:Dr Megan Argo is an astrophysicist currently based at the University of Central Lancashire. When not teaching on the on-campus and distance learning astronomy degrees, she studies galaxies and black holes with radio telescopes the size of planet Earth. She has worked in the UK, Australia and the Netherlands, been lucky enough to observe with some of the best radio telescopes on the planet, and has given public lectures around the world.

Title: ‘Mapping Mercury and the discoveries along the way’

Bio: Ben is a a third year PhD student at the Open University. For his doctoral studies he is producing a geological map of the Neruda Quadrangle (H13) of Mercury as well as undertaking a global investigation looking for extensional grabens. His background includes investigating glacial landforms on Mars as well as hydrocarbon exploration in deep-water environments on Earth. He has a MSci in Geology from the University of Birmingham, MSc in Integrated Petroleum Geoscience from the University of Aberdeen and prior to his current position, he also undertook doctoral studies in Tidal/Fluvial sedimentology at Seoul National University, South Korea.

Title: ‘Getting started in observing, and how to make it easy!’

Title:  ‘The Active Sun – Observations of our Closest Star’

Bio: Laura is a solar physicist who currently works as a research fellow at the European Space Agency (ESA) at ESTEC in the Netherlands. She received an undergraduate degree in theoretical physics from Trinity College Dublin, Ireland, and soon after joined the astrophysics research group at Trinity to complete her PhD in solar flare physics. Following her PhD, she joined NASA Goddard Space Flight Center as a postdoctoral fellow for two years where she continued to work on solar flares with a focus on X-ray observations.  Her research makes use of both space- and ground-based observations of the Sun in multiple wavelengths to help build a better understanding of the physical processes that underpin solar flare energy release. In particular, she is involved with ESA’s Solar Orbiter mission which launched in 2020 which is now providing new and unique observations of the Sun. 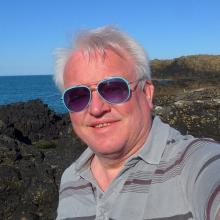 Title:  “The Apollo Story from Start to Finish”

Bio: Paul Evans’s lifelong interest in space and astronomy was piqued during the early Apollo missions. He followed the Apollo missions through the first landing of the Apollo 11 to the final landing in 1972. Paul has lived in Northern Ireland since 2003 during which time he has photographed auroras, noctilucent clouds and many sky objects and has had his photographs displayed in numerous exhibitions and publications in the UK and Ireland. He has travelled extensively and has observed astronomical phenomena and visited space exploration facilities throughout the world. Paul was President of the Irish Astronomical Association for five non-consecutive years between 2012 and 2018. He is currently the chair of the Irish Federation of Astronomy Societies.

Title: ‘Harnessing the power of stars to unveil planets and our place in the cosmos’

Bio: Heather is a UKRI Future Leader Fellow and Assistant Professor at the University of Warwick.  Through her research, she aims to enable the future confirmation of Earth-analogues, and to better understand planetary migration and evolution by disentangling stellar and planetary signatures. In particular, she is studying granulation from a two-pronged perspective: using transiting planets to resolve stellar surfaces (and also to determine star-planet orbital alignments, thereby constraining planetary migration and evolution), as well as simulating stellar surfaces with state-of-the-art 3D simulations to gain insight into the underlying physics.