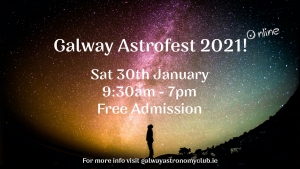 Welcome to the Galway Astronomy Festival 2021 – This year our festival will be going virtual for the first time. We hope to keep it as close to the format of our usual festivals as we can. We hope you enjoy the day.

This years festival will be presented via Zoom webinar. Registration is required. To register please click on this link 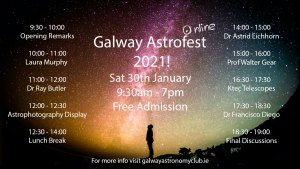 Title: ‘Come to the Dark Side: Defending Night Sky Darkness’.

Bio: Dr. Butler is a lecturer in the physics dept, of NUI Galway. He worked on high-resolution imaging and photometry of the cores of globular star clusters for his PhD in the Dept. of Physics, UCG/NUIG, in the Astronomy & Applied Imaging Research Group led by Drs. Mike Redfern and Andy Shearer. His research specializes in astronomical imaging and software technologies. This has included the development of the GUFI instrument (Galway Ultra Fast Imager), its installation at the VATT telescope in Arizona, and its use in the study of optical variabilty in cool dwarf stars. He has co-authored a Nature paper in 2015, on the discovery of auroral emission from brown dwarfs.

Title: ‘Black holes, the boundaries of reality and the deep structure of space & time’

Bio: Dr Astrid Eichhorn is Associate Professor at CP3-Origins, University of Southern Denmark.    Astrid completed her PhD at the University of Jena, Germany in 2011. She held postdoc positions at Perimeter Institute, Canada and Imperial College, London and became a junior research group leader at Heidelberg University in 2016 and associate professor at CP3-Origins at the University of Southern Denmark in 2019. Astrid has won a number of fellowships and awards, including a teaching prize and most recently a Villum Young investigator fellowship.

Title:  ‘First Light: The First Stars in the Universe’

Bio: Laura is a PhD student at Trinity College Dublin under the supervision of Prof. Jose Groh studying the first stellar explosions and their progenitors. Funded by the Irish Research Council, her work aims to understand the nature of the first stars and their explosive deaths as supernovae, with particular emphasis on how rotation affects their evolution. Laura is also interested in outreach, and is an executive committee member of WITS (Women in Technology and Science) Ireland.

Title: ‘Think Universe! Science and the accidental story of Humanity in Paradise’

Bio:Dr Francisco Diego’s career in Astronomy started at the Sociedad Astronomica de Mexico and the Planetario Luis E. Erro. He worked for several years at the Instituto de Astronomia, UNAM and then came to University College London where he got a PhD in Astronomy. Currently, he is a Senior Teaching Fellow at the Department of Physics and Astronomy, UCL, vice president of the UK Association for Astronomy Education and a fellow of the Royal Astronomical Society. Francisco has appeared on TV series like Stephen Hawking’s Universe, BBC’s The Planets, BBC’s Wonders of the Universe and The Secret Life of the Sun.

Bio: Born in Waterford City, Professor Walter Gear completed his PhD in millimetre-wave studies of Active galaxies at Queen Mary, University of London. He joined the Royal Observatory, Edinburgh and led the construction of the SCUBA camera for the James Clerk Maxwell Telescope (JCMT) in Hawaii. Walter moved on to the Mullard Space Sciences Lab at UCL, where he played a major role in the construction of the SPIRE camera and spectrometer for far-infrared wavelengths with the Herschel Space observatory. In 1999, he moved to Cardiff to create the Astronomy Instrumentation group there, and subsequently became Head of the School of Physics and Astronomy. From 2013-15 He was International Dean for the College of Physical Sciences and Engineering. Over the years, Walter has also taken many roles in peer review and advisory committees in the UK and Europe. In 2019 Walter joined NUIG as Executive Dean of the College of Science and Engineering.