Next Talk: “Noctilucent Clouds: Ice at the Edge of Space” by Ronan Newman in The Harbour Hotel, Galway 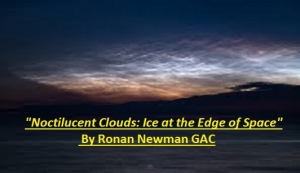 Talk: Noctilucent clouds are tenuous cloud-like phenomena in the upper atmosphere of Earth. They consist of ice crystals and are only visible during astronomical twilight. Noctilucent clouds are not fully understood and are a recently discovered meteorological phenomenon. They appear to be increasing in frequency, brightness and extent and their occurrence can be used as a sensitive guide to changes in the upper atmosphere. This talk discusses the history of these clouds and the fascinating science behind them!

Speaker: Ronan Newman is an experienced amateur astronomer and a native of Claremorris, Co Mayo. Starting in his childhood he first became interested in rockets but quickly developed an interest in Astronomy. During the 1980’s he recalls witnessing the spectacle of the Aurora Borealis several times from his parents back garden.

For the past fifteen years and as an amateur astronomer his passion has been chasing and documenting displays the Aurora Borealis from the West of Ireland and he now manages his own Face book page entitled ‘Irish Aurora Hunters Homepage’.
In 2012 he was awarded the title of ‘Irish Astronomer of the Year’ by the Irish Federation of Astronomical Societies.